Why does the shower curtain always billow in, and stick to your leg, at the bottom?

Answer: The real question is, why did it take so long to figure out that tiny magnets in the bottom of the curtain solve the problem!

This shower curtain effect is a real thing and maybe you’ve experienced it.  For sure you’ve experienced other manifestations of this same phenomenon in all sorts of areas of your life, including buildings.   And, unless you spent the last year in Sweden or Belarus you’ve definitely experienced the sort of expert opinion preening that exists around this phenomenon.

If you take a quick look around the internet you’ll quickly find that there are a number of significantly different explanations as to why shower curtains billow in and stick to you when taking a shower.  The simplest – and correct – explanation is that warm shower water raises the air temperature inside the shower, that air raises up and out over the top of the shower curtain thus creating negative pressure inside the shower stall.  This negative air pressure creates a pressure imbalance across the curtain – higher pressure outside than inside the shower stall – and that imbalance pushes the curtain in.  It’s a simple buoyancy thing – same same as stack effect in buildings, same same as fireplace chimney function, same same as radon remediation, same same as high humidity in air sealed attics.  These sorts of buoyancy/pressure imbalance phenomena are part of our everyday existence.

But some people seem to REALLY like to complicate things.  Here are a few other explanations for the shower curtain phenomenon in order from least complicated to most complicated:

The thing I love about these three explanations is that they are all bullshit.  Not just regular, run-of-the-mill bullshit, they are top quality bullshit.   This is the sort of top-quality, mathematically-modeled, computer-simulated, settled-science bull shit that can be very convincing if you’re not careful. 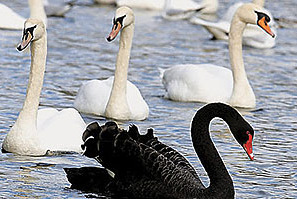 But it’s fun to talk about the complicated stuff and people seem to love it.  That rotational vortex explanation got written up in a Scientific American article in 2001.[1] and the author was awarded an Ig Nobel Prize that same year [2].  I’ll be the first to admit that I am envious of all that attention and I find it impressive.  In years past I would read that magazine cover-to-cover every month.  I’ve never been published in Scientific American.  That’s serious! 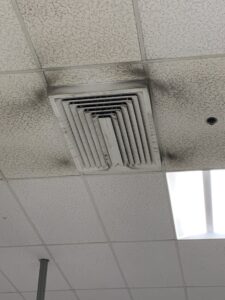 That article is an enjoyable read, it explains a rather complex computational analysis but, unfortunately, its fundamental conclusion is not correct.  Oops.  My favorite sentence is the following:  “The modern way to study fluid-flow problems is to use computers to solve the basic equations of fluid motion.” Condescension and hubris all in one short sentence.  That takes a variety of skill that few authors poses and makes me wonder how the Incas ever figured out how to create a working shower [3] and if the Wright Brothers were only lucky.

One of the other explanations, the Coanda effect, is equally fun and leads to lots of cool comparisons with other phenomena in buildings, like dust smudges around HVAC ducts.  But it also is a needlessly complicated and incorrect explanation.

Those smudges, like shower curtains stuck to your wet legs, are a real annoyance, and the ASHRAE [4] Handbook has lots to say about them.  Ignoring all their sort of correct language about the Coanda effect and smudges, the most important thing to know is that the dirt is from the room, not the duct work.  Those smudges are an indication of dusty room air.  The duct work and filter may also be dirty but that would only be coincidental.  Sometimes the same for those smudges above radiators. [5] 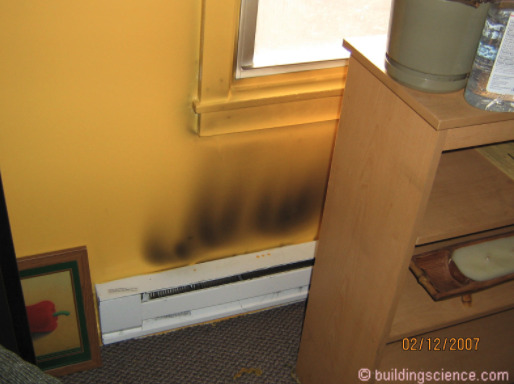 And sometimes for ghosting of studs behind drywall [6]: 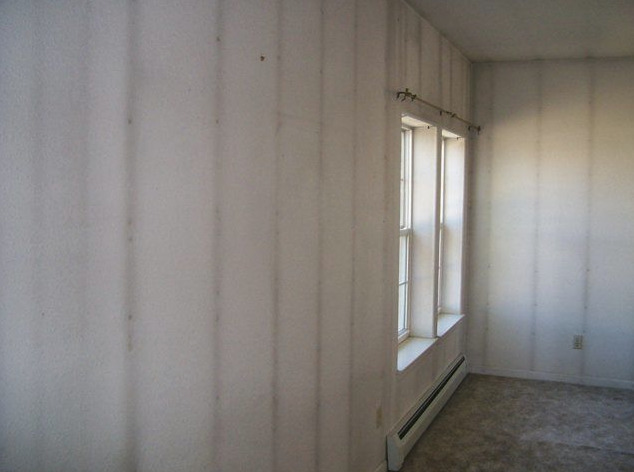 Here’s what’s happening with all these smudges:

It’s that simple.  The dust particles move with air flow in the same way your head moves along with your body when you walk.  If your feet suddenly stop, your head keeps going.  If your feet suddenly change direction, your head keeps going in the previous direction.  If a portion of that air flow changes speed or direction the particles try to move with that change but can’t since they are more dense (greater mass than the air).  That’s inertia (settled science, BTW).  If a dusty air stream is moving toward a wall or ceiling and then suddenly changes direction the air makes the turn but the “heavy” dust particle flies into the wall or ceiling and gets stuck there (aka impact deposition).

While all this Coanda stuff is useful for explaining dust smudges and keeping you comfortable when you run your forced air heating or cooling, and provides endless fun around the house, it has nothing to do with your shower curtain.  Here are a few fun Coanda effect things you can try at home: 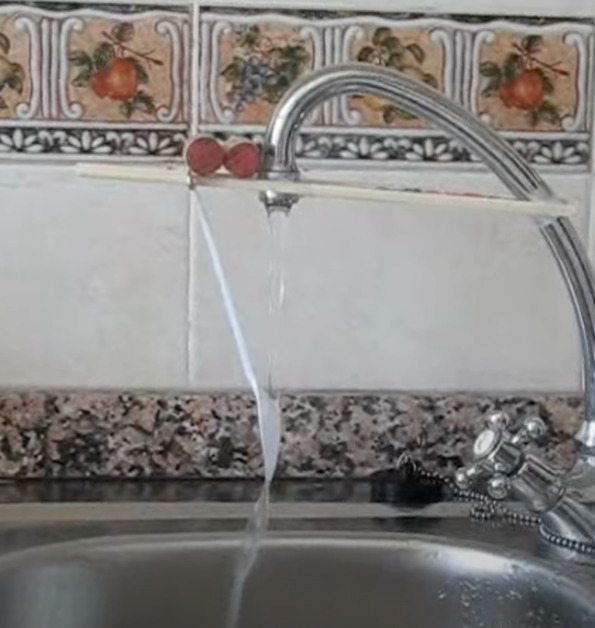 Second, the paper attracted to jet of air trick [7]: 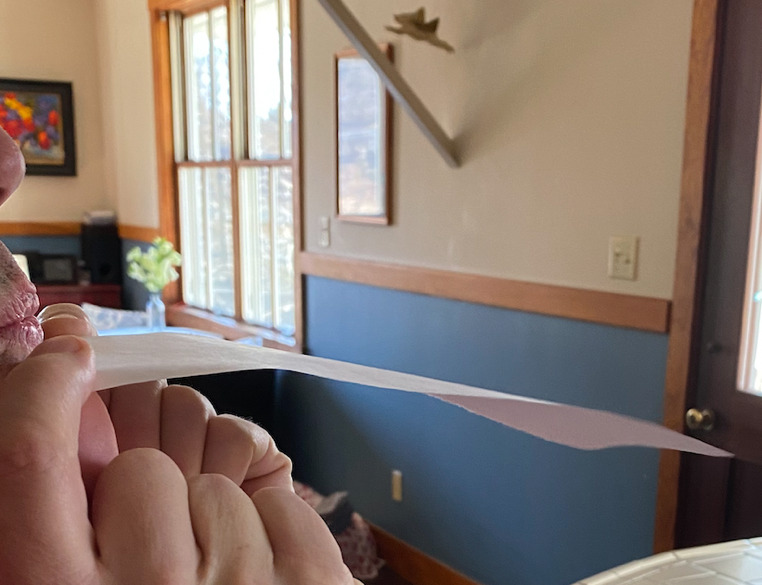 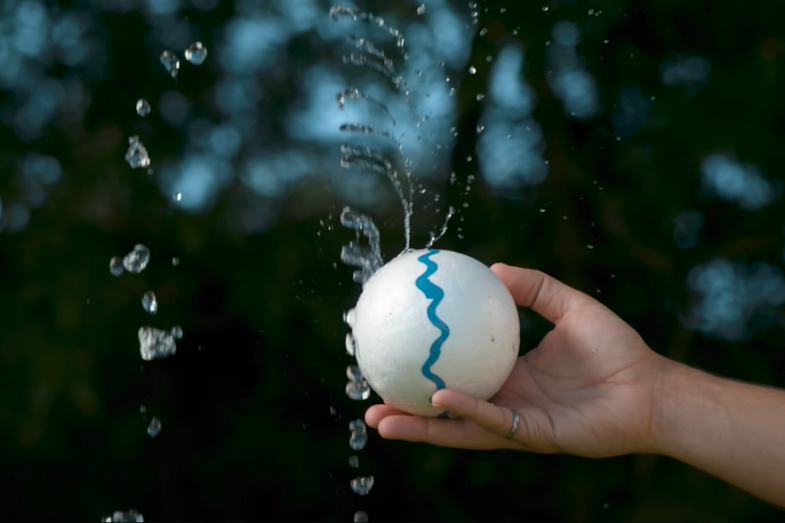 Long story short, good bullshit can be fun and convincing, but that doesn’t mean it’s correct.  No amount of fancy math or computer time can correct an incorrect hypothesis.

That’s about it for shower curtains.

[5] Building Science Corporation, BSI-114, “Up in Smoke,” by Joseph W. Lstiburek, Ph.D.  I say “sometimes” since the radiator can actually help create the dust that ends up on the wall.

[6] There are at least two causes of this stud ghosting.  Dust particles tossed there because of a rapid change in air flow direction is only one of the reasons.  Another is mold growth.

[7] Yes, that is a flying pig in the background.