RIP boiled water.  You will be mist.

Do those tiny desiccant packs really do anything useful? 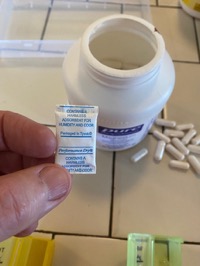 Answer: This is your brain… 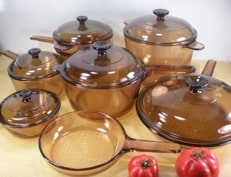 This is your brain on drugs: 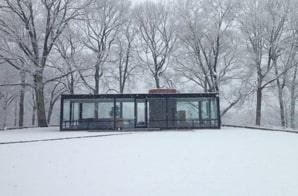 Glass is a great conductor of heat and a poor insulator.  That’s why it’s used to make pots and pans.[1]  And probably why The Glass House is not open for tours during the Winter.

If a building is intended for stuff that buildings are built for, like living or working inside, etc., separating the outside from the inside with a single sheet of plate glass, as on the famous Philip Johnson designed Glass House pictured above,  is “not so famous.” Especially if you’re anywhere on Earth other than those few places in Hawaii where you don’t even need walls.  If you can convince the code officials it’s art and not a building, go for it.

But…if we take a little bit of the material that’s inside those little packs that arrived with your vitamin supplements – desiccant – and put it between TWO plates of glass, then, we can make glazing that isn’t a complete comfort goat rodeo.  It improves things so much, we can even consider making entire walls out of that sort of “double pane” glazing[2]: 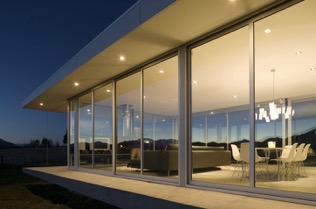 So, yeah, those little packs that arrive with new leather shoes and dog chews do something useful.  For windows, they help turn art into buildings[3].

Ignoring the oxymoronic nature of it, dual pane insulated glazing is the current standard in many locations.  In the past, before the 1930’s, it was not available anywhere for any amount of money.  The technology existed but, the product didn’t.  You just couldn’t buy windows with any insulating value that didn’t have real functional problems.  Dual pane was no big deal and multi-pane windows were not unknown but they all had problems: condensation, trapped bugs, inconvenience, ugliness, and more.  Then C. D. Haven started selling insulting, dual pane glass that solved those problems.  His product was eventually named Thermopane.  The Kleenex of glazing.  Not only did his product allow for clear viewing during the winter, but he was also way out ahead of Greta Thunberg.  Window glazing R values went from 1 to 2.  100% improvement![4] That’s a REALLY big deal.  That guy may have, single handedly, reduced CO2 emissions almost as much as the invention of fracking.  That is, until building designers started jacking up window sizes by a factor of ten.

Best of all, Thermopane had all variety of hip, artsy, print advertisements back in the day: 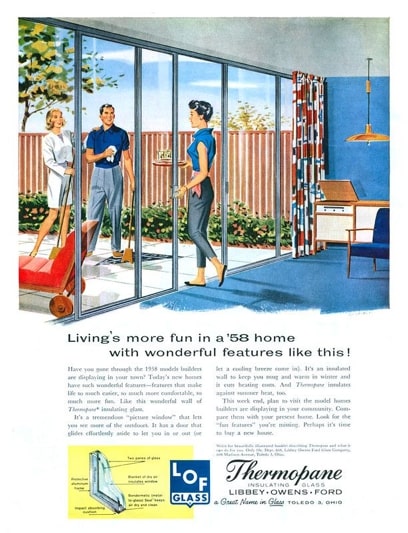 Remember when shuffleboard on the ground and not on a cruise ship was cool!?  Me either.

Not surprisingly, almost all their marketing pitched comfort and view, not CO2 or money savings:  Lots of 1950’s variety, happy, warm, children, looking out of enormous windows at cold, winter scenery.  And all from Toledo.

One of the technology tricks that made Thermopane glazing work was the same material that’s inside those little packages that are in with your vitamin supplements and newly purchased sneakers: desiccant. 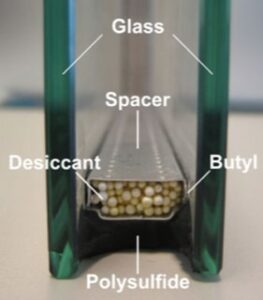 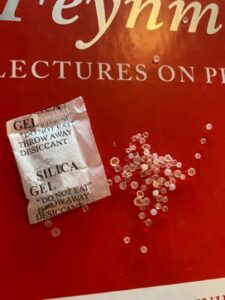 A desiccant is any material that separates water vapor from air. Meaning, it pulls water vapor out of the air; AKA “drying.”  That’s separation technology:   one material, water, is being separated from another material, air. Usually, mixing things is easy and separating things is difficult.[5]  Desiccants are unique in that they facilitate this separation process naturally and easily, it just happens.  You don’t need to flip a switch, or add heat, or anything.[6]  Just put the desiccant into the air and the vapor separates from the air.  If the vapor is in the desiccant and not fogged up on the glass, that’s great, and that was the magic of Thermapane windows.

Desiccants are all around us, all the time.  Not just those little man-made packs but, every day, natural stuff like wood, paper, fabrics, dirt, rocks, paint, glass, metal, and almost everything else.  It’s just that some things are better desiccants than others.[7]

Whenever two materials get very close together (molecule close, not “social distance” close) they interact with each other.  That interaction is a mix of attraction and repulsion, depending on what’s going on at the point of contact.  There’s always some attraction, even if, on balance, there is repulsion.  And vice versa.  Water vapor and the desiccant in those little packs have more attraction than repulsion.  So much attraction that often, the “most likely” arrangement is for the water vapor that was floating in the air to “attach” to the solid thing.  Most likely and attach aren’t the proper words but, good enough for a basic understanding.

Same for wood (or wood pulp, or paper).  The xylem (capillary tubes) in wood is made of cellulose.  Water and cellulose get along splendidly.  So much so that it’s damn near impossible to remove all water from wood without burning the wood to ashes.[8]

Same for mortar – not vapor related, but it’s the same sort of “most likely” and “attached” thing (AKA physical chemistry).  Some of the bond between mortar and bricks is mechanical, meaning, the cement crystals in the mortar grow into and around nooks and crannies in the brick but, some of the bond is just attraction between different materials when they get super close together.  Not exactly a chemical bond, not exactly not a chemical bond.  Of course, plenty strong enough to hold our brick walls together.

Same thing for Gecko lizard fingers as they run, up-side-down, across ceilings.

Those little desiccant packs don’t have wood chips in them but, they could.  Instead, they have materials that are cheaper and better than wood:  sand and dirt.  Special sand and special dirt.  Usually it’s either diatomaceous earth, silica gel, or a zeolite.  Diatomaceous earth just comes out of the ground: it’s high silica content dirt (+/- 80 to 90% silica[9]).  Silica gel[10] is manmade, amorphous, porous silica – manmade diatomaceous earth.  Zeolite is … well, how much time do you have?  In short, they are inorganic, three dimensional, porous polymers with lots of silicon-oxygen bonds and a mix of other inorganic elements.  There are an innumerable number of different, unique zeolites, each with its own special use.  It’s usually man-made but is also found in nature.  Representative photo below. 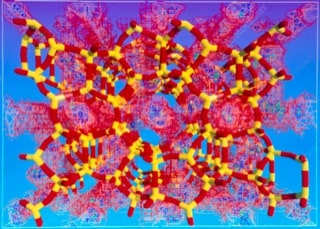 Here’s the most important thing:  all these desiccant materials are porous.  Extremely porous.  None of them look porous at all;  they look totally solid.  They are micro-porous.  You can’t see or feel those micro-pores, they are super small:  often as small as five, or twenty, or one hundred individual water molecules side-by-side. One hundred water molecules side-by-side is one tenth of diddly squat.  The diameter of a typical human hair is about 2,600 times bigger than one hundred water molecules side-by-side.[11]  That sort of micro-porosity results in enormous surface areas.  Image taking the floor area of the room you are in right now (any room, doesn’t matter) and folding it onto itself until it fits inside a green pea.  That’s how much surface area there is in those desiccant materials. 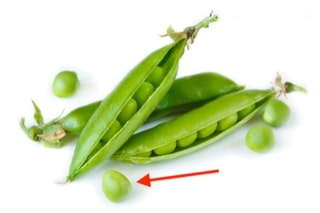 So, you take this concentrated, special surface stuff and put a little in your vitamin supplement bottle.  The water vapor in that bottle will leave the air and stick to the desiccant surface (inside the pores).  That’s the “preferred” and “attach” thing mentioned above.  Great!  That’s just what you want when you’re a manufacturer of medicines, or leather goods, or windows, or delicate electronics.  Anything that is sensitive to water vapor benefits from less water vapor and desiccants help with that.  That’s why you find those little packs in with all sorts of consumer goods, and truck brake systems.

Desiccants stop working when the surface concentration of water inside all those tiny pores is in equilibrium with the vapor concentration in the air.

We’re all familiar with this sort of phenomenon with wood:  as relative humidity changes, the moisture content of wood changes (and the wood swells or shrinks).  Same for desiccants but, without the swelling and shrinking.  As relative humidity changes the equilibrium surface water concentration on the desiccant changes.  If dry air blows in, the desiccant gives up some surface water to that dry air (sort of like evaporation).  If humid air blows in, then the desiccant pulls more water out of that air (sort of like condensation).

So, chances are, any desiccant pack you ever see is just like the wood floor you’re walking on, already at equilibrium or on its way to equilibrium with the air around it.  If that desiccant pack is in the shoe box with your recently purchased shoes, it’s probably not doing anything other than moving water back and forth between its porous surface and the air in the box as the air in that box keeps changing with its surroundings (since it’s not airtight).  Same for the desiccant between windowpanes: it’s on its way to equilibrium.  Luckily, with modern windows, the time to equilibrium is long since the airtight seal is good (not perfect).

Desiccants work for a while, then eventually, they stop working.  Then, when conditions change, they start working again.  That can be useful, sometimes, in the exact right circumstances.  If the desiccant pack is working, you’ll only know when it fails.  Windows:  they rarely fog up on day one but always fog up eventually.

That’s about it for desiccant.

[1] There’s a little bit of poetic license in that sentence. It’s true but it’s not the whole truth. You can’t cook with window glass, it would break from the thermal expansion. Pyrex® – the cooking glass – has a few other chemicals added in that allow it to withstand cooking temperatures. The thermal conductivity of Pyrex® and window glass are about the same. Both are not as conductive as most other kitchen pan materials like steel or cast iron, and both are much, much worse insulators than all wall insulation materials, like fiberglass. FYI, other than soapstone for everything, I recommend Pyrex® saucepans, Pyrex® roaster pans, cast iron frying pans, stainless-steel stock pots, and stoneware slow cookers .

[2] Just make sure you get it all AOK’d by a game theorist…I mean energy modeler…before you ask for controlling authority approval.

[3] Or maybe that should be ‘help buildings be more artsy’? ….you get the idea.

[4] Well…OK….50% less heat transfer but, innumeracy isn’t a crime when it’s in print. Or at least that’s what I’ve been led to believe.

[5] Usually. Of course, there are plenty of examples of the opposite being true: oil and water, vegans and carnivores, etc.

[6] That’s the whole Second Law of Thermodynamics – Gibbs Free Energy – Entropy thing but, whatever, you can get through life just fine without knowing ALL the details.

[7] Sort of like plate glass and spray foam as insulation – it’s relative. “Compared to what?” is always a good question.

[8] Curiously, soot, one of the things that’s made when you burn wood, doesn’t get along with water at all and is wildly hydrophobic. If your teapot spout is a dribbler, just blacken it with some candle soot and it will pour splendidly and without dribbling. Hmmm…makes me wonder if I should recommend Shou-sugi-ban siding more often.

[10] Technically, silica xerogel when it’s a desiccant but, that’s only useful if you’re playing the chemistry version of Trivial Pursuit.