This week’s question:
Why does my fireplace and chimney make that crazy howling sound on windy nights?

Last week’s question:
What’s going on in this photo? 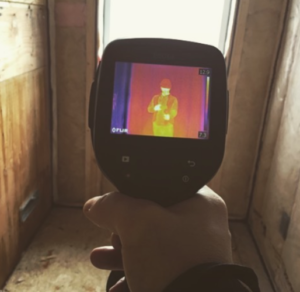 Answer:
That’s an image of an infra-red electromagnetic wave reflection off the inside of a window. And the camera man is wearing a hard hat.

According to Plutarch[1], old man Archimedes saved[2] the Sicilian city of Syracuse by using hexagonal mirrors to reflect the Sun’s rays onto the attacking Roman ships, heating them up so much that they caught fire. We all heard about it in grade school when they were trying to teach us about light and prisms and mirrors and stuff like that. No big deal, everyone’s seen mirrors before, we get it. We get it so well that the US government took that idea and super-sized it. They built a solar “power tower” out in the Mojavi Dessert to convert the sun’s solar energy into more useful energy. It worked, and it generates 10 megawatts of power – that’s enough for about 6,000 houses.

[1] Plutarch, Marcellus, written 75 AD, translated by John Dryden, MIT Press. Please keep in mind that there’s a good chance this old story is just a tall tale. First, he wrote that story about 300 years after it happened. That’s like me writing about George Washington’s childhood. Second, Plutarch was Greek, and he probably wanted to make the Roman’s look like idiots and the Greeks look like gods. Yeah, I know, Sicily is not Greece, but, apparently, Sicilians considered themselves Greek at that time (+/- 215 BC). Regardless, Archimedes was a real person, he was super smart, and the Romans did attack Syracuse.

[2] Well, he held off the Romans for four years before they killed him. 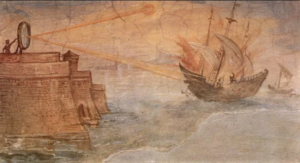 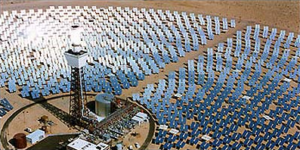 So, how could it possibly be a surprise when these buildings started roasting their neighbors[1]: 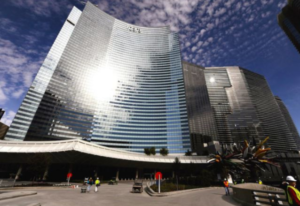 This week’s question photo – the one with the infra-red image – is not mine. I just liked it and it reminded me of that Archimedes thing and those buildings that are roasting their neighbors. It was posted on Instagram by a company in Vancouver, BC called Capital Home Energy. I don’t know them at all, but, I like their Instagram posts and they seem to like infra-red imaging so much that it even appears on the “About” page of their website[1]. They probably use their IR camera a lot as part of their services.

In that photo, the camera operator, I think his name is Luke Dolan, has the IR camera in his right hand and his regular phone camera in his left hand. The photo is from the regular phone camera, but it shows the IR camera image on the IR camera. The IR camera is pointed at a window and sunlight is streaming in. The window shows up as a bright yellow-orange (hot) color in the IR camera screen and the surrounding walls show up as dull blue-purple (cool). This makes sense, the walls are insulated much more than the window, so, they are cooler on the interior. The more interesting thing, however, is the human image. That image is a reflection off the window. The window is acting somewhat like a mirror and it shows a very clear IR image of the camera man.

A little refresher on electromagnetic radiation: 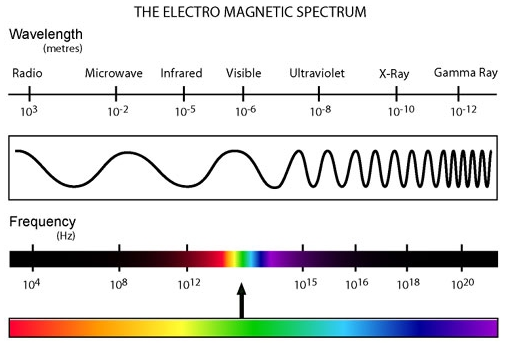 When light “impacts” anything only three things can happen: it passes through, it gets absorbed or it gets reflected. Or, some portion of each of those things happens. So, some stuff is clear, some stuff is not clear, some stuff is a little clear and a little reflective. Unfortunately, all that changes as the wavelength of the electromagnetic radiation changes. What’s clear to radio waves may be opaque to microwaves and what’s clear to gamma rays may be opaque to light rays. And on and on and on. 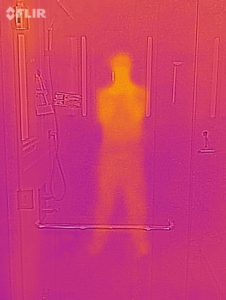 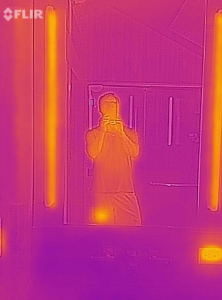 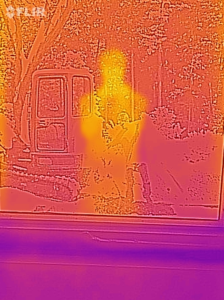 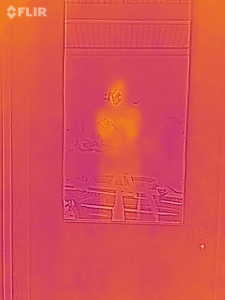 My heat image looks about the same to me in all four photos, maybe just a little more reflection from the low-e window and a little clearer in the mirror reflection. The glass is reflecting some and transmitting some (it’s also absorbing some, but, hold that thought).

Now, here’s me in front of a metal bookcase; I’m waving at the camera with my left arm: 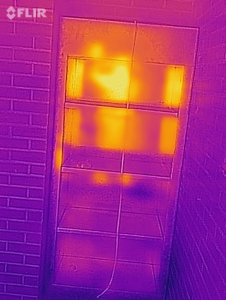 That’s a much more intense heat image. Two things, first, the metal is reflecting more IR than the glass. Second, I’m not seeing any thermal image from anything beyond the metal. No transmittance, all reflection and absorption.

Here are a few other IR images involving glass: 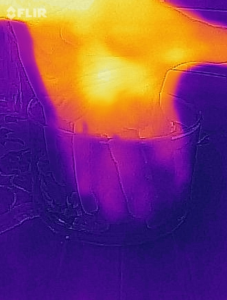 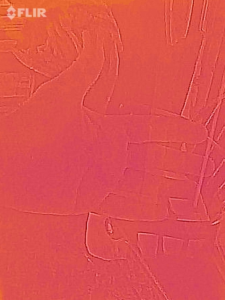 That’s my hand in a glass jar and my hand behind a pane of insulating glass (not low-e). Some IR is getting through the glass, but, not so much.

One thing about all these IR image photos, they’re a little misleading. Not all IR is created equal. Most of the IR we get from the Sun is short wavelength. We call that “near infra-red” (because it’s wavelength is near that of visible light, I guess). Most of the IR we get from room temperature objects is longer wavelength. We call that “far infra-red” (no idea why). All these photos are showing mostly long wavelength, far infra-red images. My camera sees IR in a temperature range of about 0oF to 250oF. The Sun is about 9,000oF. These images don’t give us too much info on the near infra-red.

So what!? Well, if we can control infra-red radiation with glass we can change the energy balance of our buildings and that’s a big deal. This is such a big deal that our government took our hard earned tax dollars and spent it on a campaign to convince window glass manufacturers to sell a new product incorporating an existing technology previously developed by a British company: low-e glass.

Low-e glass does impact the infra-red transmittance through our windows, so, it does change the energy balance of our buildings and it does help us save energy. Glass manufacturers knew all about it for years before they started selling it in the 1980’s. Prior to 1973 energy was so cheap that nobody cared to save much, it was cheaper to use it than to conserve it. Low-e technology was only used in places where it provided a needed function, like airplane windshields and astronaut’s visors. 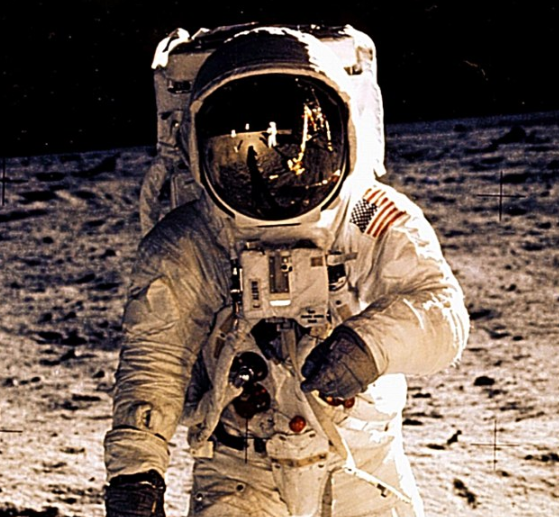 After a few years of prodding by the government society caught up with the need to conserve energy and window manufacturers started offering low-e glazing. They were more expensive, but, the payback was between 2 and 6 years. In the beginning, energy conservation had nothing to do with saving the planet, it was all about saving your paycheck.

The e in low-e stands for emissivity. “Low-e” means that the emissivity value is low. Emissivity is always between 0 and 1, so, low is usually something like 0.1, not 0.8. Regarding glazing, “low-e” is a microscopically thin film of metal oxide applied to one side of a pane of glass and for double pane windows it’s usually on one of the inner surfaces.[1]

[1] Of course, there are multiple processes for doing this with multiple choices and outcomes and every manufacturer is always trying to invent something new and improved, but, that description is good enough.

Ignoring all the technical mumbo-jumbo, it’s useful at cocktail parties and lunch-and-learns to know that things with low emissivity are good reflectors of IR radiation. You can think of the emissivity number as the percentage of IR radiation that is NOT reflected. This isn’t exactly true since reflectivity changes with wavelength, but, close enough for this email. So, you can think of a low-e coating like a super thin, see through, infra-red mirror.  Here are some emissivity values to give you some idea of the numbers.[1]

[1] I should give you about twelve notes with this table to qualify and explain it, but, I’m going to skip that.

Now, I can see that a few of you are raising your hands. I know what you want to ask: “why do we need low-e coatings when it’s pretty obvious from those photos above that glass does a pretty good job of reflecting and absorbing long wavelength IR.” Good observation. So, let’s look at insulating glass window pane. 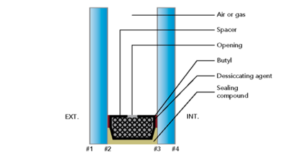 So, the low-e coating really does two things. It reduces the amount of energy that otherwise would escape through the window and it increases the temperature of surface #4. That second thing makes the room feel more comfortable.

Since low-e was first brought to the window market in the 1980’s, better and different low-e coatings have been developed. Now, windows sold in southern climates have one type of low-e and those sold in northern climates have another. In the south, the low-e reflects more of the Sun’s variety of IR. Also, it’s usually on surface #2, not surface #3. That keeps more heat out, so, you don’t have to run your air conditioner as much. That’s an energy saver.

The good news is, you don’t have to know any of this. All you need to know is what’s already written into the code: U-factors and Solar Heat Gain Coefficients (SHGC). All this low-e gobble-dee-goop is captured in those two values. Pick a window that meets or beats the code values for the climate zone of the project, make sure it has a reasonable visual transmission percentage and you’re done (at least with that stuff). For your convenience, here’s a copy of that code (this is the residential code, not the non-residential code) 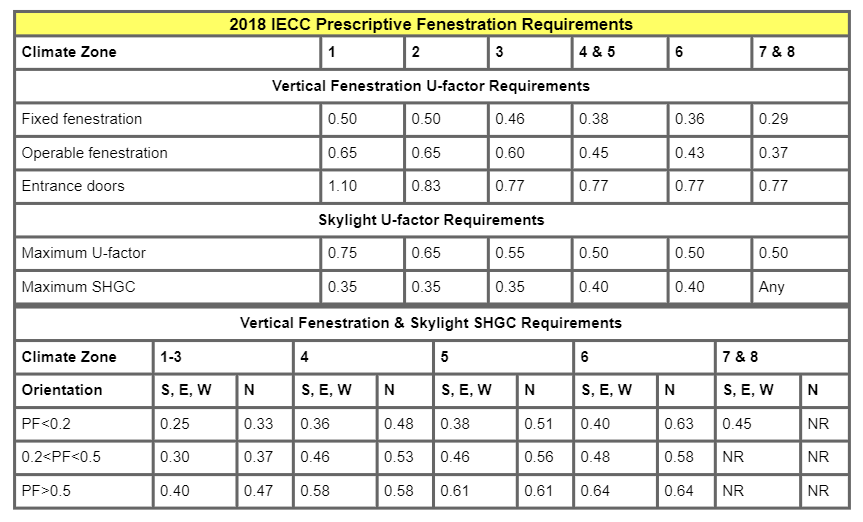 (BTW, PF is projection factor.  Projection width divided by height above the bottom of the window.)

And here’s the map of those climate zones: 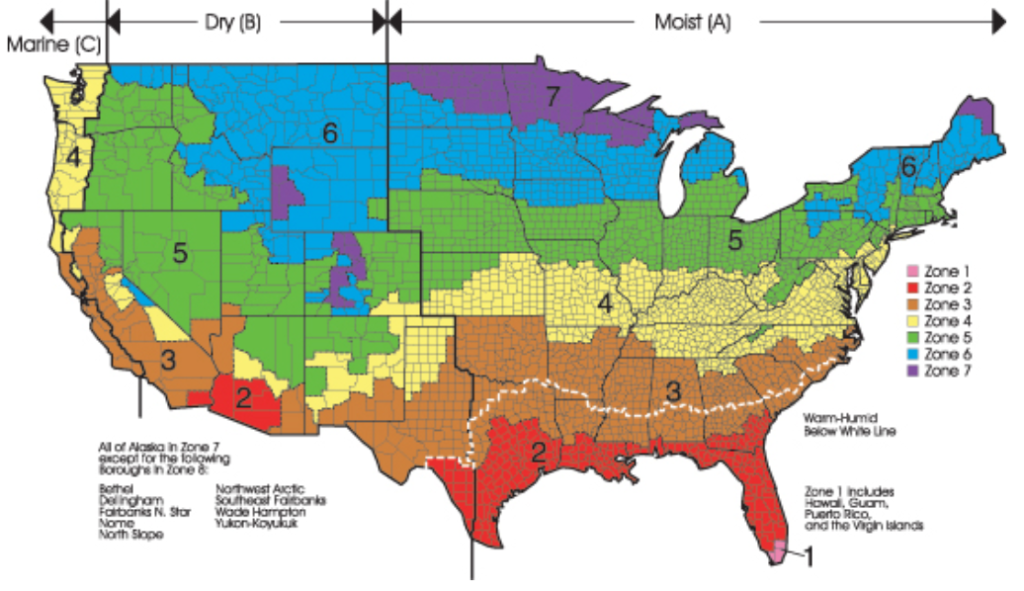 That’s about it for glass and infra-red radiation, I need to watch the end of the Spain v Russia game. Good luck with that chimney thing.