This week’s question:
Is there a preferred way to build and operate a meat aging room?

Last week’s question:
Why does my fireplace and chimney make that crazy howling sound on windy nights?

Vitruvius was a well-known blogger during the Roman era and some of the things he wrote about are still interesting today. For example, his comments on how to improve the acoustics in theaters by placing brass jars partially filled with water at various locations around the theater beneath patron’s seats. Clearly, the impact of shapes on sound was an important issue to the Romans.[1]

Luckily, builders of cathedrals during medieval times in France got their hands on some Irish reprints of Vitruvius’s book and they incorporated some of those ideas into their designs. As a result, their choirs sounded better. They did it a little different though, after all, their structures were very different – cathedrals, not open air theaters. Here’s the way one of them looks in the cathedral of the Chartreuse Notre-Dame-du-Val-de-Benediction, Villeneuve-les-Avignon, France.[2]

[1] Marcus Vitruvius Pollio, de Architectura, Chapter 1, Section 9. But, in all fairness, he got it from the Pythagoreans. They did a lot more than just right triangles. 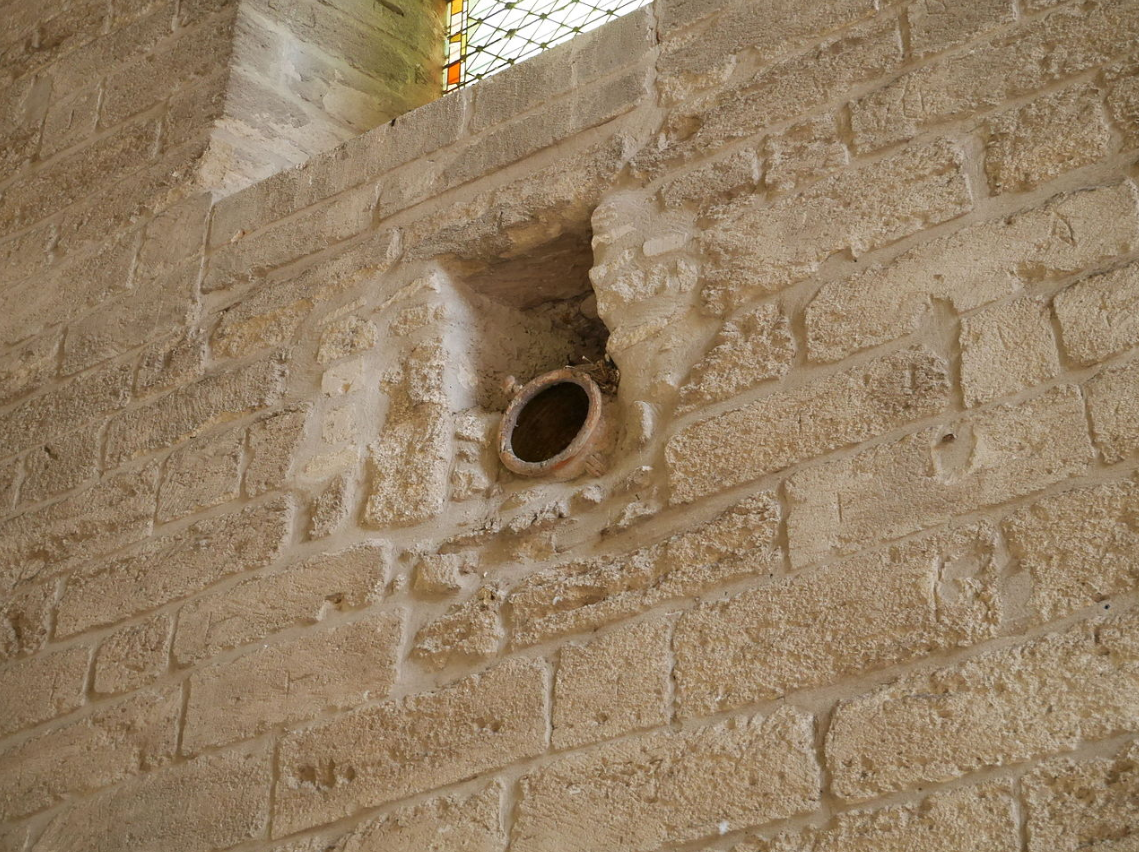 It doesn’t look like much, but, it works. It helps to amplify some desired sounds and reduce some undesirable sounds.

Our ears have evolved to sense air pressure waves. We call it hearing when the frequency of those pressure waves is within a certain range: 20 Hz to 20,000 Hz.[1] Air pressure waves are like water waves or electromagnetic waves in that they do all the things that waves are famous for: they bounce off things, they elongate and compress, they pile up on each other, etc. For air pressure waves, frequency is what we hear as pitch, amplitude is what we hear as volume. That amplitude is the pressure differential across the wave. For sounds that we hear that’s around 0.005 Pascals – that’s equivalent to the weight of a few strands of long, thick hair.[2] Not quite infinitesimal but not breezy either. This link provides a great pictorial representation of what’s going on with air molecules in a sound wave:

[1] It’s more like 1,000 Hz to 5,000 Hz, but, some people hear ghosts. Hz, BTW is a Hertz. It’s the Le Système Internationale d’Unités (SI) unit of frequency. One Hertz is one complete wave per second. Years ago, that was called one cycle per second (CPS), but, that was too understandable, so, the SI stepped in and confused it up. It was, however, named after a total genius, Heinrich Hertz – the first person to prove the existence of electro-magnetic waves.

[2] As a reference, one sheet of copy paper puts about 1 Pascal of pressure on your hand when you hold it up. The hydrostatic pressure at the bottom of your coffee cup is about 750 Pascals. 0.005 Pascals – the amplitude of average sound waves – is really, really small compared to the pressures we experience in our daily lives.

I don’t know why we describe sound waves with frequency and electro-magnetic waves with wavelength. It seems like it’s just to confuse me. Nonetheless, in the end, it’s the same thing. All electromagnetic waves, regardless of wavelength, travel through a medium all at the same speed. Same for sound waves. Through a medium, all sound waves, regardless of wavelength, travel at the same speed. That allows us to use frequency or wavelength interchangeably, they both describe the same thing – distance between peaks and troughs of the wave and how frequently those peaks pass a fixed location.

Now, if you change the medium – air vs. water vs. steel – the speed of those waves changes. Dramatically.

There are lots of ways to make air pressure waves in frequencies that we hear – talking does it, blowing across the edge of a blade of grass can do it, plucking a very tight string does it, etc., etc., etc. Anything that disturbs air at the right frequency creates a noise that we hear. Musical instruments are usually our favorite example. On a typical, 88 key piano this is middle C:

On the Beethan building in Manchester England, this is middle C: 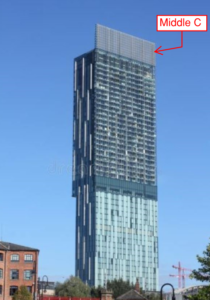 Both produce a sound with a frequency of about 261 Hz. Ian Simpson, the architect, must have studied Vitruvius’s book.

This sort of noise issue from buildings is not uncommon and every year a few buildings around the world suffer from it. These days it’s usually caused by those slats and shading devices added to save energy. Unintended consequences can be irritating.[1]

[1] Not for nothing, but, look at the façade of the building.  The curtain wall is 100% glass and the shades are 95% closed.  Now, I’m an engineer and I understand that I have no style sense, but, am I the only one that thinks there’s a disconnect there between design and use?  And, BTW, Manchester, England is at the same northern latitude as Edmonton, Alberta, Canada. It’s not like Houston or Miami, those pasty Brits are dying for a bit of Sun, yet, they’re still drawing all the shades.

Occasionally, things are designed to purposefully make noise in the wind. Below is a photo of an example from Lancashire, England. It’s called the Singing Ringing Tree. 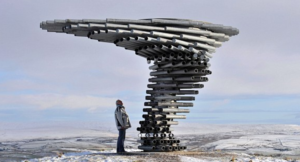 Chimneys that howl on windy nights are sort of like those unfortunate buildings that sing in the wind – their shape, and just the right wind speed, conspires to create unintended noise. Usually it’s because of the shape of the flue: tall, thin and hollow. If it’s a modern chimney, it’s closed at the bottom with a damper. That’s sort of like a clarinet or some organ pipes. Physicists call this a closed end air column, just like those vessels Vitruvius wrote about. As wind blows over the chimney some goes into the chimney. That pressurizes the air in the chimney. That pressure builds up until it’s enough to push its way out. That brings the pressure back to neutral. If the wind is still blowing the process starts all over again. And again, and again, and again. In the time it took you to read that description the right wind would have made about 2,500 pressure waves. The process happens very fast – like those whistles referees use – and that’s a frequency perfect for our hearing.

Usually, those chimney howls are very low pitch – low frequency – and that makes sense based on the maths physicists have figured out over the years, and, they sound creepy on stormy nights. It doesn’t happen all the time, but, if the wind speed is just right, if the chimney height is just right, if the chimney flue is just the right size, then it will howl. It’s just like those wine bottles you made music with at your parent’s dinner table after they polished off the wine. Here’s a photo of young Vitruvius testing out some designs for a Roman theater: 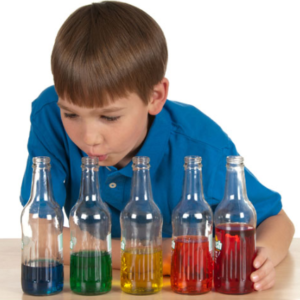 There are also other ways for chimneys to make noise. Sometimes it’s just because of their exterior shape or the combination of their exterior shape and their distance from another building component, like a second chimney. It’s the same principle: the wind creates local pockets of air that are both above and below the pressure of the surrounding air, those differentials pull air back and forth rapidly at just the right frequency, and that’s noise. We usually hear that as the whooshing noise of wind wiping around the corner of a building, but, if things are just right, that whoosh becomes a howl.

If the chimney isn’t closed at the bottom it can still howl. Physicists call that case “open ended air column,” but, it’s the same general principle – something creates air pressure waves – but these waves are created by the flow of air through the chimney (usually a stove pipe in this case) and some peculiarity of the shape of the chimney. A flute is an open ended air column, but, the air flow is different.

Unfortunately, it’s extremely difficult to know, during the design process, if a chimney, or any part of a building, is going to make a weird noise when wind blows over it. The general rules for tall buildings are to use slats that are extremely stiff or frequently braced and don’t use thin cables or round things (<2”). With house chimneys your only real hope is to use a cowl that interrupts the wind flow over the top of the flue. There are all sorts of cowl shapes on the market and you may have to try a few to find one that works (doesn’t sing). Here are a few sample shapes, but, something more substantial, like a stone cap, may also work. 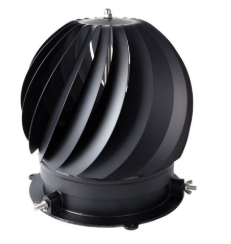 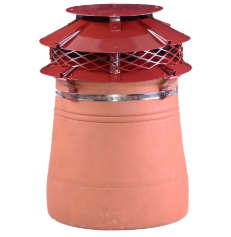 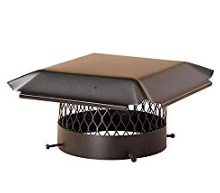 If you fundamentally change the shape of the chimney this could also eliminate an unwanted noise. There is a thing called a chimney balloon that does this. You stuff a deflated balloon up the chimney, from the bottom, then fill it up. This plugs the flue and creates a reduced size of the closed end air column, and, if you’re lucky, eliminates the unwanted noise. Or, maybe just raises the pitch so it only irritates your dog. I don’t like this, it seems like it would be a big pain in the ass and maybe I would forget it’s there and accidentally burn the house down the next time I light a fire.

That’s about it for noisy chimneys. Good luck with that meat locker thing.