Parallel lines have so much in common.  It’s a shame they never get to meet.

How much excess water is still in a house at the end of the building process when you turn over the keys to the new homeowner? 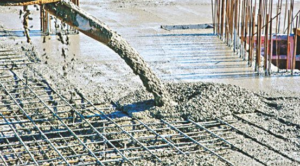 Dynamic problems – problems whose outcome changes as time progresses – are fun, but, can be difficult to solve.  I know because I had to solve lots of them back when I was a process design engineer.  Think of it like trying to figure out the sub-surface ground temperature when you know that the surface gets hot in the sun every day and cool every night and gets bitterly cold every winter and blazing hot every summer.  Or maybe trying to figure out when you should ignite rocket engine number two in a three-phase rocket launch.  Or, when a state, as its population increases should get another congressional representative.

When you mathematically model dynamic problems you can end up with equations that look like this:

That’s a screen grab from my master’s degree research survey, “Considering the Palladium-Membrane Pump for use in Fusion Power Reactors.”

These days, I would prefer to run into a hungry bear deep in the wilderness than to be asked to solve those sorts of equations.  For sure my shorts will stay cleaner with the bear.  But, apparently, even back on the day this was difficult.  My conclusion was (paraphrasing) “This model I thought up sucks, the equations are too difficult to solve, and we should model this process differently.”

I’m going to deal with this excess water in buildings “differently.”

Excess water in a building is a dynamic problem just like those palladium membrane pumps in fusion power reactors, but, I’m older and wiser now.   Maybe wiser.  Now, instead of having to hack into the NSA’s computers to do my computing I’m just going to use a pencil and the back of an envelope.[1]

Usually I’m writing about unwanted water that gets into our buildings from rain or condensation and that sort of thing.  That’s a different sort of excess water.  That’s unwanted excess water and it’s almost always bad from the first moment it enters the building.  The excess water I’m referring to in this email is both good and necessary, until it’s not.  I refer to it as necessary excess water.

Here’s a partial list of typical construction materials that bring excess water with them when incorporated into a building:

I’m tempted to also consider water content in the air as excess water, but, that would complicate things too much, so, I’m going to skip that for the moment.  Maybe later.

Let’s consider an “average” house.  If you’re building is anything other than average, you’ll have to use your own envelope to figure out how different it is from average.  Here’s what I consider average: 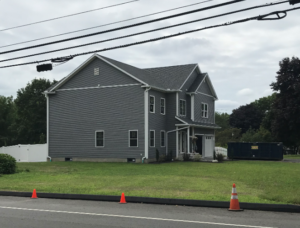 Make a few assumptions, scratch out a few calculations on the back of a magazine and this is what you come up with:

Here are the calculations if you care to check them: 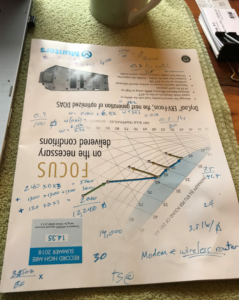 So, the short answer to this week’s question is that there’s about 1,700 gallons of excess water in a house when the keys get turned over.  That’s about the same amount of water as a large kiddie pool: 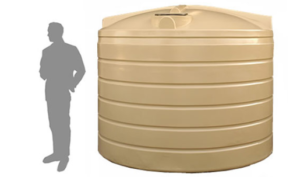 That’s a lot of water, but, it doesn’t seem like it’s been fatal to our buildings.  At least, for buildings built in the past.  They all survived.

Of course, occasionally something goes wrong because of this excess water thing.  Here’s a photo of a nice walnut floor that self-destructed after it was installed over a newly placed concrete slab: 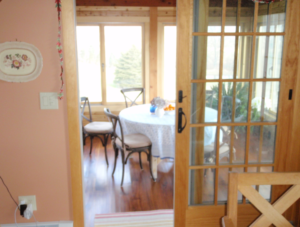 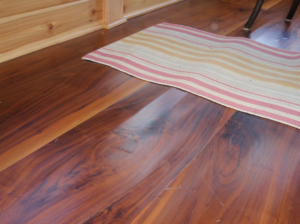 The excess water in the concrete slab dried out and the kiln-dried walnut absorbed it.  The expansion of the wood was too great, and it lifted itself off the slab (it was glued down) and broke apart.  That was an expensive mistake.  First, the slab should have been allowed to dry out for a much greater period, but, more importantly, a vapor barrier (liquid applied, not sheet plastic[3]) should have been installed on top of the slab.[4]

Similarly, lots of money is spent on paint touch up the year after construction is finished.   As the framing lumber dries out it shrinks and that causes all sorts of minor imperfections in the drywall finish and connections between drywall and surrounding materials.  Sometimes I think this should be added to the scope of new construction projects, but, neither homeowners or contractors seem to like this.  In any case, it needs to be explained to new homeowners that this is a real thing, not anyone’s fault, and there is a cost associated with it.  Below is an extreme example, but, you get the idea. 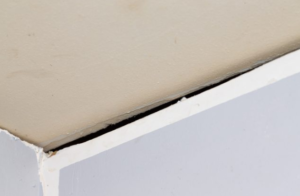 I’m of the opinion that wood trim should never be caulked along its edges where it meets the drywall, but, I’ve never been successful at convincing anyone of this.  I’m also of the opinion that we should quirk all our trim (light and shade, I suppose, for you architects). 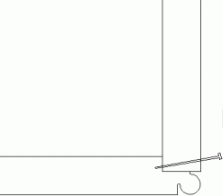 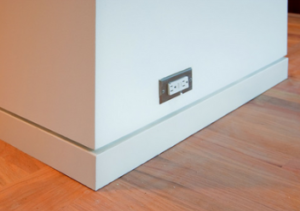 These sorts of small details at least allow things to move around without bankrupting the contractor or causing your reputation to get flushed.

It’s worthwhile realizing, however, that most homes (and most buildings) built prior to about the turn of this millennium were leaky, breezy sieves.  That leaky, breezy feature really helped this excess water drying thing.  That excess water was easily carried out of the house on a breeze that came in through all the typical holes that existed around windows and doors and fiberglass insulation.  Now, our houses are tighter.  It’s even in the building code, so, they must be tighter.  Tighter means less breezy and less breezy means that it’s not as easy for that excess water to breeze out of the house.  It can just add to the interior air moisture content if it’s not dealt with.  It is very possible that you will need to run a dehumidifier in the basement and the attic for the first year or more after construction is complete.  The basement because that’s where all the concrete is and the attic because that’s where the hot humid air goes as it floats up through the house (then it gets trapped there because you probably did an excellent job of spray foam insulation between the roof rafters).

That’s about it for construction drying.

[1] This is a time honored calculation method that has solved many serious problems including Enrico Fermi’s calculation of the strength of the first atomic bomb, Arnold Wilkins calculation proving that the Germans couldn’t possibly have invented a death-ray weapon that used radio waves (but, that those radio waves might be useful for long term detection – radar), Charles Townes invention of laser technology, and Arthur Laffer’s Laffer curve showing the relationship between taxation and federal revenue.

[2] Generally, I don’t like referring to equilibrium because it’s so F’ing difficult to achieve.  It’s the razor’s edge of nature.   It’s more of a theoretical concept and the reality is more like everything is somewhere on its way toward equilibrium.  Which equilibrium is what I’m usually most unsure of.

[3] Things can grow below the sheet plastic and get smelly.

[4] This is known as the belt and suspenders approach:  Dry the slab (that’s the belt) plus add a vapor barrier (that’s the suspenders).  If the client is very wealthy sometimes I also add a second pair of underwear, just in case (that would be concrete additives to reduce original water content).