Asphalt, macadam, black-top?  Which one should I specify? And, is tarmac only for airport runways?

First, it’s ass-fault, not ash-fault and, not az-fault.  Very humorous for sixth graders.  Ash-fault is for Canadians and paving contractors in Queens and some parts of Westchester County. 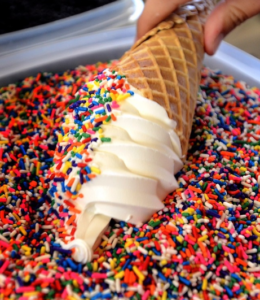 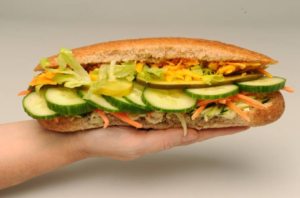 Are those jimmies, sprinkles or shots? Is that a wedge, a sub, a hoagie, a grinder, a hero or a po’ boy?

Asphalt, black-top and tarmac is sort of like that.  It’s mostly semantics and it’s whatever the speaker defines it as.  That’s, of course, where things can go all wrong.  What I think and what you say may be completely different even though we both mean to communicate the same thing.  Don’t order a Coke in New York as if you’re still in Texas when you mean orange soda. 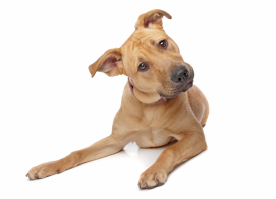 Here’s a list of words that are typically referring to the same pavement thing:

They are usually all referring to that black stuff used for road paving. 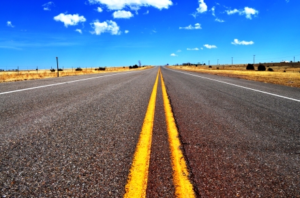 But, that wasn’t always the way and sometimes it’s still not the way and confusion reigns.

I believe we should all say “asphalt concrete” when referring to that black material we use to pave roads and driveways.  Asphalt concrete is engineer speak and I’m an engineer, so, I like it.  Therefore, it is correct.[1]

Asphalt concrete is a blended mixture of aggregate and a liquid binder (cement).  The aggregate is heated up to about 300oF and the binder to about 200oF before they are mixed together. This mixture stiffens up when temperatures cool down.  The aggregate is usually stone, but, can be crushed glass and that sort of thing.  The binder is usually asphalt but can also be bitumen or tar.  Sometimes this is referred to as asphalt cement.  There are, of course, like Portland Cement concrete, all sorts of admixtures and chemical tricks we can play with asphalt concrete today, but, I’m not going to get into that.

Asphalt is a man-made product made from crude oil – basically, it’s the second worst crud that comes out of the catalytic cracker in oil refineries (the worst is tar).  Bitumen is the naturally occurring version of asphalt.  Bitumen oozes out of the ground and has been known to, and used by, humans for thousands of years. The chemical composition of both asphalt and bitumen is imprecise.  It’s not like kerosene or benzene where the name refers to an exact, known chemical.  Asphalt and bitumen contain thousands of long-chain carbon compounds that are individually unknown.  Think of it like cheap hotdog meat. Same for tar but add in elemental carbon – more on that later.

Today, asphalt concrete is the dominant road paving material.  About 94% of all paved roads in the United States are paved with asphalt.  That is total dominance.

Before cars, trains and the industrial revolution most roads were just dirt.  There were multiple reasons for this.  First, it’s cheap.  Second, it’s the perfect material for reducing injuries to the feet and legs of both humans and the animals we have domesticated – horses, cows, sheep, etc.  If our primary means of transportation was still walking and horseback riding we would not pave our roads, we would leave them soft and suffer through the mud.  Third, wheels were expensive as all getup.  Before the industrial revolution all wheels were made of wood and it’s not easy to make a wheel from wood. The Incas never figured it out.   Today you see old wooden wagon wheels parked in suburban front lawns as slowly decaying decoration, but, back in the day those things were like gold and there weren’t so many like you might think.   So, not so many wheeled vehicles, cheap, mostly foot traffic – dirt.  Perfect and done.  Sure, there were a few paved roads here and there, even the Romans paved a few, but they were the exception, not the rule, and, if you were on a long walk, you stayed off the stone pavement – it hurt your feet.  When you see all those famous American Revolution scenes in paintings they’re always on dirt roads, not paved roads.  No paved roads in any John Trumbull paintings. 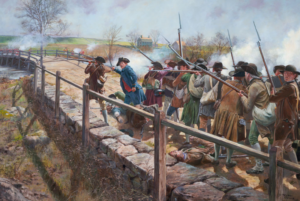 As wheels became more common because of the industrialization of the manufacturing process and the improvement in iron and steel production there became a necessity for “paved” roads.  The dirt became impossible for the wheels as it got wet and as the traffic increased.  In the late 1700’s and early 1800’s engineers started wondering how to properly pave roadways and, eventually, they re-invented Roman paving methods.  But, they experimented with lots of materials and assemblies first.

They tried big rocks, they tried small rocks, they even tried bitumen tiles[2].  Ultimately, they discovered two things:  first, if they got surface water to run off the road surface rapidly and if they kept the ground water away the road would be durable and, second, if the paving stones were slightly smaller than the carriage wheel treads the carriage ride would be smoother and easier.  This last little bit of knowledge was brought to us by a Scottish engineer named John Loudon McAdam.  In short, he specified that the road surface should be raised above its surroundings, it should be cambered to facilitate rapid drainage off its surface, it should be on a base of large stones and should have it’s finished surface bound tightly together with crushed stones of a uniform size that would jig-saw lock together as traffic passed over them.  This was called macadamisation or simply macadam.  And that’s why we sometimes call asphalt concrete macadam today.  I don’t know how that a slipped into the word and why it isn’t mcadam and mcadamisation.

McAdam starting building roads this way in 1816 and it was the greatest improvement in road pavement since the Romans.  Below is a photo of a street I walked on in Ouro Preto, Brazil that is almost macadamized – the stones are a little bigger in this street than specified by McAdam, but, you get the idea – the top stones all lock together.  McAdam specified 2” maximum diameter stones for the top layer.  The prisoners masons who created this gravel (by hammering larger stones) were supposed to check the stone size by putting it into their mouth.  If it just barely fit it was the proper size.  The stones in this photo were about the size of my fist. 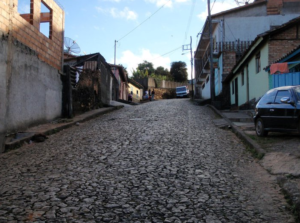 Here’s a painting by Carl Rakeman of a macadamized road installation in progress in the United States.  The fellow in the red coat appears to be checking stone size. 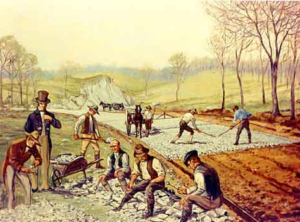 Macadamisation was such a big deal that it quickly spread around the world and even one of the first significant roads built in the United States, the Boonsborough Turnpike Road, was built using the macadamisation technique.  It’s been re-paved a few times since then and today it’s known as Alternate Route 40. 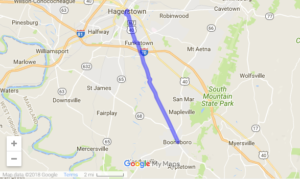 And everything was pretty cool until cars came along in the late 1800’s.

The problem with cars and macadamized roads is that cars are fast.  Structurally, macadamized roads are fine, but, the fast spinning tires pull dust up out of the gravel.  When car tires rotate and the tread separates from the road surface an area of low pressure (a vacuum) is created. On gravel roads this causes the dust to be lifted out of the crevices between the stones and into the air.  On busy city, macadamized roads the air became a dusty, choking mess.  Something had to be done.

The Principality of Monaco rarely figures large in building science, but, regarding modern pavement, Monaco is king.  And not because of that Formula One race that happens there every year.

In 1894 Prince Albert I asked Dr. Ernest Guglielminetti to help solve the dusty road problem in Monaco.  Dr. Guglielminetti was an interesting fellow who was originally from Switzerland but had worked around the world.  He was also an inventor and is credited with inventing the self-contained breathing apparatus of the sort you see mountaineers, firefighters and frogmen wear today.  By the time he arrived in Monaco he as a successful bon vivant and socialite.

Dr. Ernest Guglielminetti did what any self-respecting consultant would do when requested to solve a problem he knew nothing about, he applied somebody else’s solution for a different problem to the current problem and called it his own solution.  When he was working as a medical doctor in Indonesia he noticed that the hospitals had solved their dust problem by coating their wooden floors with tar.  That sounds miserable to me, but, apparently it reduced the dust problem and the doctor thought it might work on gravel roads also.

Side note:  tar is not asphalt.  It’s also not bitumen.  Tar, like asphalt and bitumen is a non-descript, liquid mixture of mostly long chain carbon crap.  Unlike asphalt and bitumen, it is usually made from coal or wood, not crude oil.  It can be made from crude oil, but, like those other confusing words, when people say tar they usually mean coal tar or wood tar.  In Dr. Guglielminetti’s time it was coal tar and it was a waste product made during the production of “city gas.”  That was the gas, derived from coal, used in cities to power street lights and machinery derived.  It was very common in the late 1800’s and early 1900’s.

In 1902 Dr. Guglielminetti spread tar across the macadamized roads and the dust problem went away.  With a flair for the dramatic, the doctor decided to call this sort of pavement tar macadam.  Now we call it tarmac.  The doctor was given the nickname “Dr Goudron” (Dr. Tar) and today there is a minor monument to him in Monaco and they recently issued a stamp commemorating his invention. 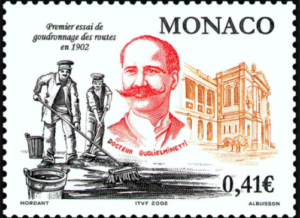 If I’m not mistaken, I believe he is only the second building scientist to have a stamp issued in his honor.  Benjamin Franklin was the first.  That sort of brings a tear to my eye.

So, tarmac isn’t just for airport runways.  I don’t know why it’s so tightly associated with runways.  I guess it just sounds better to say that you were stuck on the tarmac for hours rather than stuck on the asphalt.

That’s about it for asphalt concrete.

[1] I think Aristotle published the proof of this sort of logic, but I can’t find it right now.

[2] The Place de la Concorde in Paris was paved with natural bitumen tiles in the 1800’s – some people say the current pavement is just as ugly today.