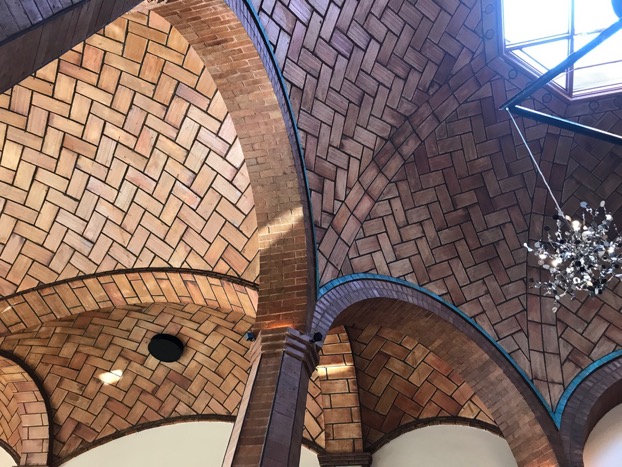 Answer: I really want to blame Walter Gropius[1] but, I’m not going to give him the satisfaction.

Those are Catalan[2] vaults that date to 1916.  They are both decorative and structural.  Almost all Catalan vaults in the USA – about 2,000 of them – were built by the Guastavino Company[3].  They were the premier Catalan vault design and construction company in the USA between 1885 and 1962. Hundreds of their vaults can still be seen in many public and private buildings across the country.  Rafael Guastavino didn’t invent this variety of vault, but he did bring it to prominence in the USA, and he did promote more decorative uses of it.

There is nothing magical about all those tile vaults, they only look magical since they are so thin and decorative.  They are just masonry and behave exactly like masonry. Their history isn’t entirely known but, certainly they have been in continuous and regular use since Medieval times.  They are built with two or more layers of tile buttered together with mortar.  The individual tiles are usually about one inch thick.  The first layer of tiles is jointed with rapid setting Plaster of Paris (gypsum plaster).  Forms can be used to help outline the vault shapes, and some shapes require these forms, but not all.  Many can be self-supporting as they are built, and in these cases no supporting scaffolding is needed.  Once in a rare occasion these days someone will build such a vault for a building, but it’s extremely rare.

Not a single one of the vaults built by the Guastavino company has ever failed in service. 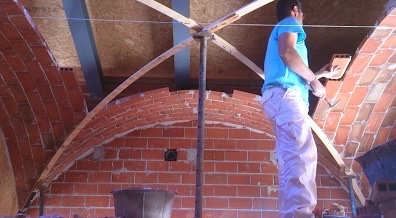 We don’t build those classy, vaulted ceilings anymore because they went out of style.  We moved on – or maybe I should say went back to – other cool stuff, like the TWA terminal at JFK airport, all crisp, and clean, and unadorned.   That crisp, clean, unadorned look was how most Catalan vaults appeared both before and after Guastavino popularized the decorative tile look. It was common practice to plaster over the structure.  Lots of Antonio Gaudi’s work has nice clean plaster over Catalan or brick vaults.  Some say we lost “the wisdom of making construction decorate the building”[4] but I don’t believe Gaudi or Calatrava would agree with that.  I believe it’s just an issue of attitudes regarding style. 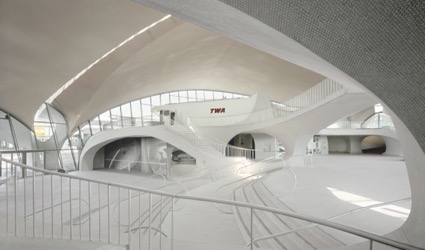 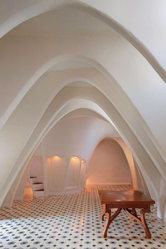 It’s very tempting to imagine that we don’t build those classy tile vaults anymore because they’re too expensive but, that’s false.  It’s not that those tile vaults aren’t expensive, they are, but they’ve always been expensive, and they’ve always been more expensive than other available alternatives.  In fact, they were so expensive the guy who popularized them in the United States – Rafael Guastavino – didn’t use them when he built his own house or when he built his own factory.[5]. He used wood and steel.[6]

It’s also very tempting to imagine that we stopped building those tile vaults because the trained labor force disappeared.  Not true.  Anyone who can install ceramic tile, or any sort of masonry can build those masonry vaults, and, as far as I know, there is no shortage of tile installers.  In fact, if you search around on YouTube you’ll find any number of videos of various masons and non-masons building Catalan vaults.  Some of them look like they’ve got experience with mortar, some of them look like they’ve never stepped foot on a construction site, but they all are successful in building a structural tile vault.  It’s just not so difficult, and that’s one of the reasons it was so widely used for so many hundreds of years.[7] Below is an image from one of those YouTube videos; I like the guy in the background staring at his phone: 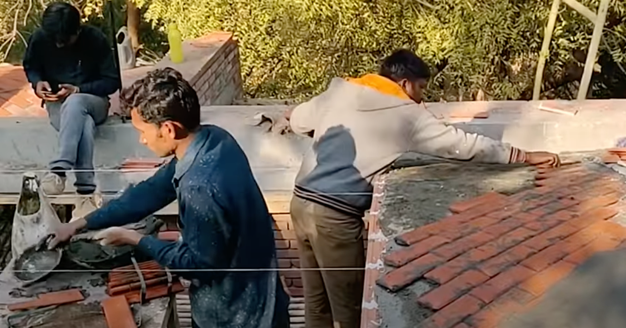 It’s equally tempting to blame the loss on our collective inability to do, understand or execute (on the job site) the geometry necessary for this sort of work.  This is non-serious thinking.  Today’s architecture and construction is far more complex than the geometry of those vaults and, it is my opinion that today’s workforce is not only better educated but individually equipped with immediate access to fantastic, helpful and useful information.  Just look at that photo above:  The guy in the background isn’t surfing Facebook, he’s studying a 3D image from the architectural drawings!  Or maybe he’s watching a YouTube on how to build a structural tile vault.  And look at the photo below from a present-day jobsite.  That’s worse than the inside of a nuclear submarine – super complicated – and I’m always amazed how today’s workers navigate that complexity with ease. 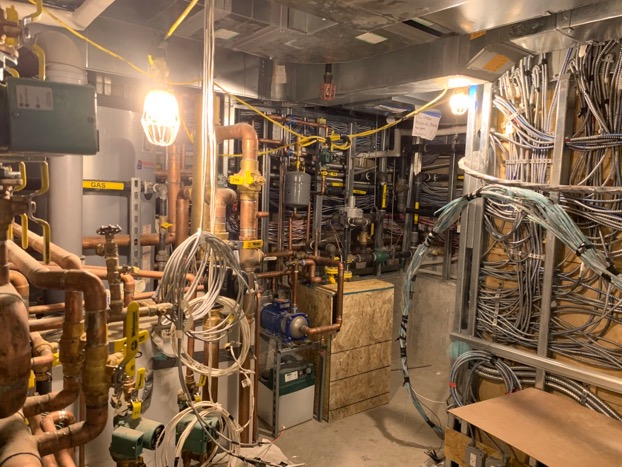 It is true, however, that our industry fundamentally changed between 1885 and 1962 and those changes disfavored a system like Catalan vaults.  Those changes were in several areas:

Lots of cool things were built prior to these changes:  the Pantheon, that big dome in Florence, the Cluny Abby,  the Boston Public Library, and more.  The “Master Builders” of that era relied on their experience and judgement, not code requirements, computer-generated analysis, or standard-of-care considerations.  The good buildings stayed up and we still enjoy them today, the bad ones fell down and got recycled.  Very Darwinian – survival of the fittest! 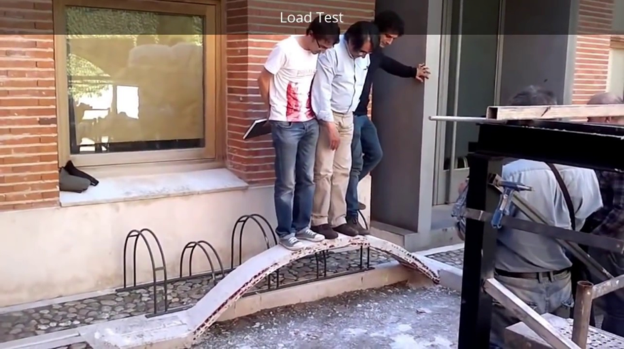 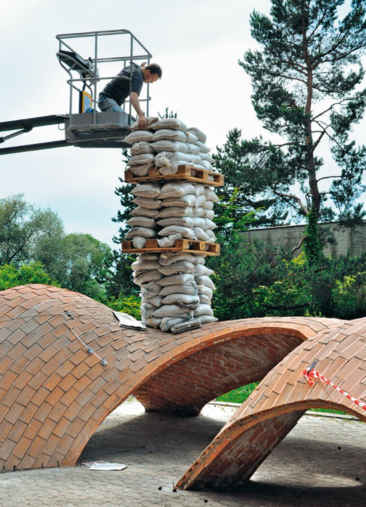 Those Catalan vaults are as strong as any masonry vault[8] and as fireproof as any masonry vault, so, they were easy and convenient to incorporate into a job in the late 1800’s and early 1900’s.  They look flimsy since they are so thin, but they are insanely strong in compression.[9] The Boston Public Library construction, 1889, is a good example of this.  The architect, not the building department, specified a required floor capacity of 400 PSF.  A vault was built.  That vault was loaded up to 450 PSF. The architect approved that submittal.  Off to the races with construction.

Advance the clock to the 1930’s, 40’s and 50’s and things are different.  Now you have to answer to the man – the building code, the professional licensure boards, insurance companies, etc.  Now architects farm out their engineering, those engineers satisfy the man with calculations that solve equilibrium equations and that’s the modern way.  Until recently, those calculations were difficult for Catalan vaults.  The design method was graphic statics, not statics by calculation.  No calculations equals no insurance, no building permit, and maybe no future work (after you lose your license).   That sort of thing is not good for marketing a structural system and became a useful excuse for ditching tile vaults in favor of steel and reinforced concrete vaults.

Today, BTW, all those calculations can be done on your iPhone.

So, yeah, it was Gropius.  He was the champion of a new, less decorated, less historically grounded style for which the calculations were easy.  People went for that style, real estate developers went for it, governments went for it, and pretty soon, the older style faded away.  The heyday for structural tile vaulting in the USA was around 1915 – just a few years after the original Penn Station was built in NYC – and it became less and less common over the next 47 years until the Guastavino Company closed its doors permanently in 1962 – just a few years after the Seagram Building was put up in NYC.

What I’m wondering, though, is why isn’t it used a little more frequently these days?  We have everything needed to do it easily now:  the geometry and calculations are easy with our modern software and computers, the tile is cheap and available, the formwork is cheap and easy[10], and the labor is available.

For example, why not use it for super thin profile spiral or elliptical stairs?  The necessary structure is only about 3” thick and eliminates the need for a large stringer or concealed steel.  Glue a veneer of marble onto the structure in the photo on the left below, add a fancy bronze railing and you might have something really special.  If you were planning on a solid masonry assembly like that set of stairs in the Supreme Court building in DC then a veneered structural tile assembly might be a nice value engineering alternative. 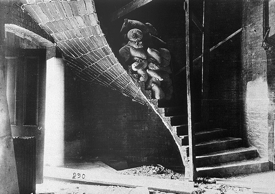 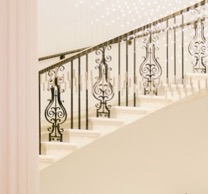 And residential natatoriums! Come on, this is a no brainer! Those tile assemblies are just what you want: unaffected by moisture, unaffected by nasty chemicals in the air, vapor barrier on the proper side (glazed tile on the hot, wet interior), insulation on the proper side (outside the structure), you don’t have to monkey around with galvanized steel, there are no concealed spaces, air leaks are easier to control, thermal bridging is easier to control, etc., etc. All good, and it looks cool. If your client has the sort of money needed for a pool in the basement, or off in its own building, they have enough money for a structural tile vault. 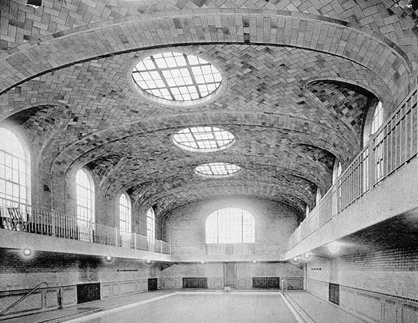 Green roofs? Of course! Nothing to rot or rust if the irrigation system runs amok. Plenty of strength to load it up with enough soil to grow and oak forest. And, you’ll get extra LEED points since the structural materials have a lower embodied carbon footprint. 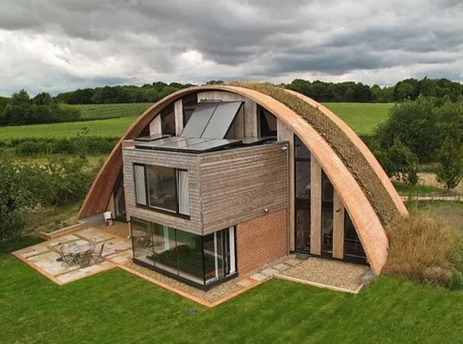 That’s about it for ceilings and structural tile vaults.

[1] A college dropout who billed himself as an architect between 1908 and 1969. He brought the prominence of “modern” architecture to schools of architecture in the USA while also promoting the importance of bow ties, berets and those silly glasses that Philip Johnson later made famous.

[2] These sorts of vaults are known by many names: Catalan, thin tile, structural tile, timbrel, Spanish tile, Guastavino, etc. etc. I like Catalan, and structural tile, so, that’s what I call them. BTW, some of the arches in that photo are standard brick arches, not Catalan vaults.

[3] The Guastavinos – Rafael and Rafael, Jr. – founded, and cratered, a number of different companies with different names. Guastavino Company is the easiest way for me to refer to the work familiar to most people today.

[5] His son, Rafael Guastavino, Jr., did, however, use them in his own home when he built it in Bay Shore, NY in 1912. In fact, he used so much tile the house has come to be known as “The tile house.”

[6] Ironically, the Guastavino Fireproof Tile Company factory burned down once because it was built of wood and not structural tile.

[7] The decorative stuff exposed on the interior of a Catalan vault can be difficult since the work surface is curved but it’s not rocket science and even Michelangelo was able to work through that problem.

[9] BTW, Rafael Guastavino did not understand the engineering and basic physics of Catalan vaults. Whenever asked to explain how they work he always got it wrong. Not just a little wrong; totally wrong. But he was very good at designing and building them properly.

[10] A company called Archway, in Grand Prairie, Texas, sells inexpensive and easy to install wooden kits for all sorts of vaulted ceiling shapes. 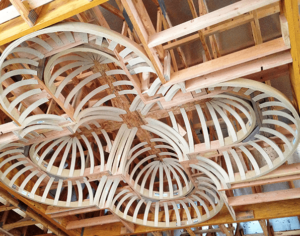